A Sunday At Cosmopolitan Self Made Summit*

*this post is sponsored by Very, however all thoughts and photographs are my own*

I know what you’re thinking. How in the bloody bloody hell did you manage to get invited to a Cosmopolitan event Jade? And in truth, I don’t have a single f’ing clue either.

As I was queuing for my post Boxercise class Subway (turkey & cheese on hearty Italian just FYI) the lovely ladies at Very* reached out to me and asked if I would be interested in attending one of the days at the Cosmopolitan Self Made Summit event that was happening 14th-15th April. After thoroughly examining the email and making sure it was actually meant for me, I swiftly RSVP’d ‘yes’ with absolutely zero chill.

So after a 6:00am alarm call, and having fake eyelashes on before most of the television stations had come to life I was on my merry lil way to Landan tan for the event to start promptly at 9:15. We’ll glaze over the fact that it took me longer to find the venue then the actual time of travel. The Etc Venue was cleverly hidden from the iPhone’s map, and threw me massively.

Once I finally found the venue, everyone was greeted and given their itinerary for the day, and this is where the option was the select which of the two speeches you would like to attend in the morning and afternoon.

Well. The spread that we were presented with was an absolute bloody dream. There was everything from pastries, fresh juices, an assortment of breads and jams, yoghurts, cereals and enough fruit to open your own stall on the market. 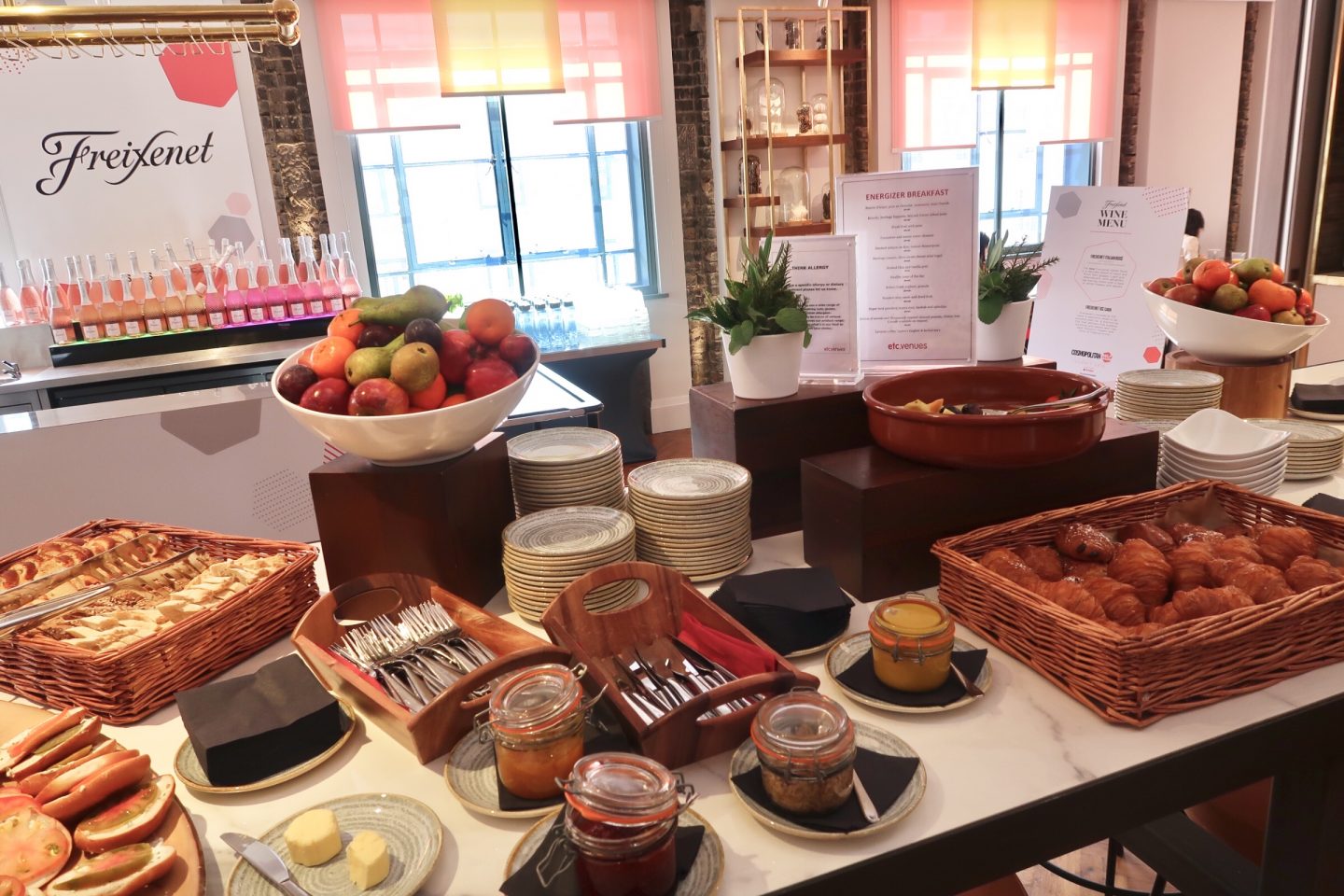 Whilst I was debating if anyone would notice if I went up for thirds, we were all chaperoned into the main hall for the first of our talks. It was hosted by the editor of Cosmo magazine; Farrah Storr. Who warmed up the crowd for the first speaker, Caroline Flack. There was many questions around how Caroline got into the television industry, how she has become so successful, the troubles she’s faced along the way, some of the work she has been offered that isn’t the most flattering.

All of which was totally inspiring, however I felt as though I was just starring at her legs the whole time. Obvs in the non-creepiest way. I just couldn’t fathom how they were so toned and cellulite free. WHAT IS YOUR SECRET CAZ?!

Once the informal interview was concluded, the questions turned to the audience and if they had any burning questions for either Farrah or Caroline. Which I utterly adored, breaking down those barriers and getting into the nitty gritty. 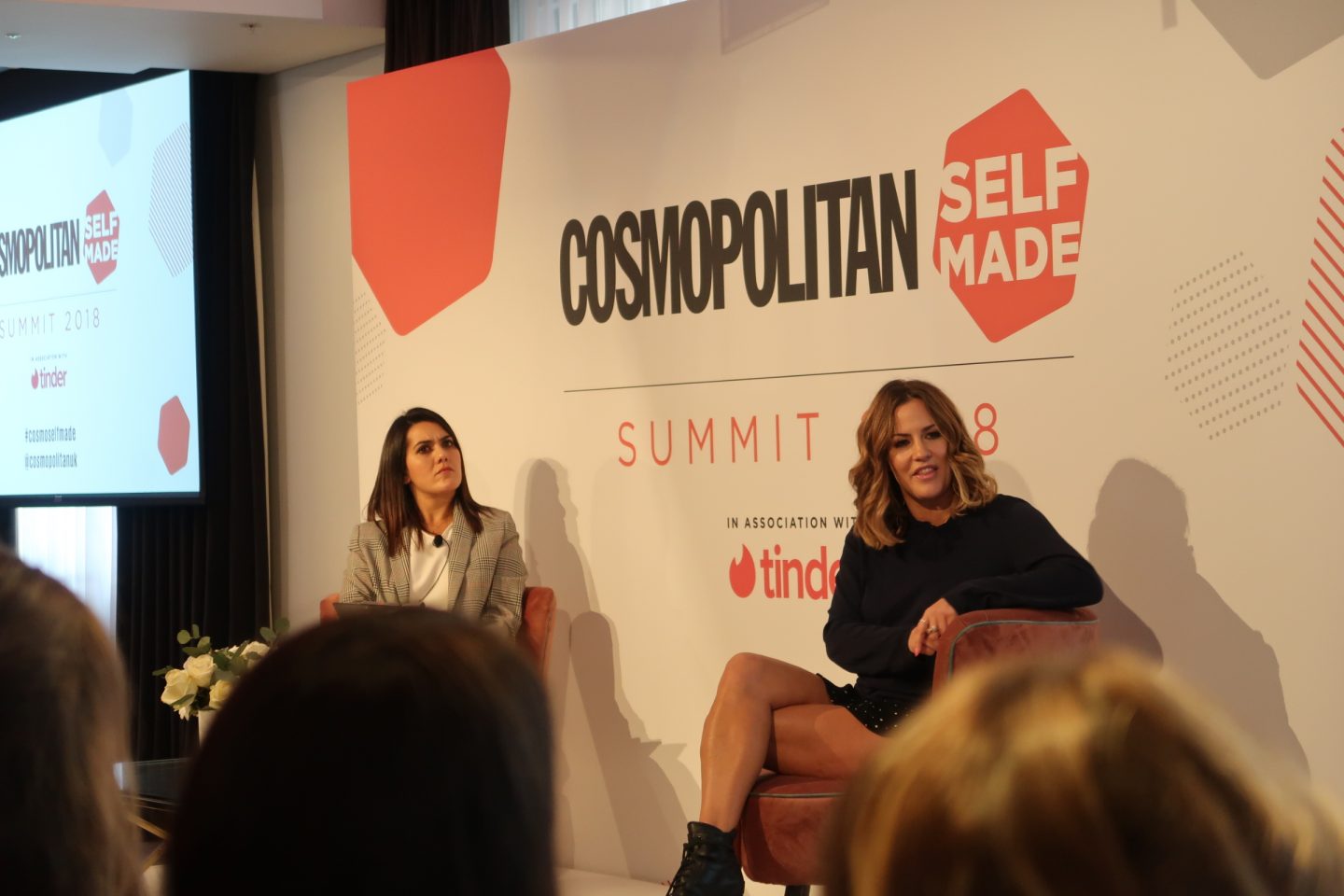 After our chats with Caroline and Farrah, we had half an hour for a ‘coffee break’. The majority of which I spent taking selfies in the mirrors in the toilets as they had the #cosmoselfmade on them, cos yknow, the ‘gram.

Once that was concluded, and I made myself look like a right turnip it was time for the first of our selected choices. I chose to listen to ‘Wanderlust: How to Earn A Packet By Traveling The World’, as with the likes of Instagram it seems we are plastered with photos of people in exotic locations who never seem to be doing the boring jobs the rest of us are. I wanted to know their secrets.

The talk was hosted by deputy editor of Cosmo Shoshana Goldberg, with guests Radha Vyas (founder of Flash Pack), Mollie Bylett (founder of Where’s Mollie) and Scarlette Douglas (presenter of A Place In The Sun). The ladies were asked questions about how their careers all started, the successes they have come across, their ‘big breaks’, how they were all ready to throw their careers aside at some stages, the work that goes behind setting up these fabulous companies and industries. And how they too become overwhelmed, feel inadequate and have their doubts like the rest of us.

They were all so sweet and refreshingly honest, I came away with a real feeling of purpose and inspiration. And in the case of Radha, her company did a complete 180 from near failure to roaring success off the back of one photograph that went viral. How crazy is that?

Much like the breakfast there was quite the assortment of goodies, ranging from chicken, fish cakes, beans, cold meats, cheese and crackers and more salad and fruit then I thought possible to be in one venue.

After having my lunch and a lovely chat with Devika Wood the founder of Vida who was there for on of the other sessions, (who was a complete and total babe may I add), I went to explore the pop-up stands.

As the event is on such a large scale, there were several brands that sponsored the event that had little pop-up stalls for us all to enjoy. Including a Skinny Dip stall, a photo stand with Very, an express manicure with Jade Angel, fake eyelash application with Eyelure, a hair and makeup makeover with Givenchy and so much more. 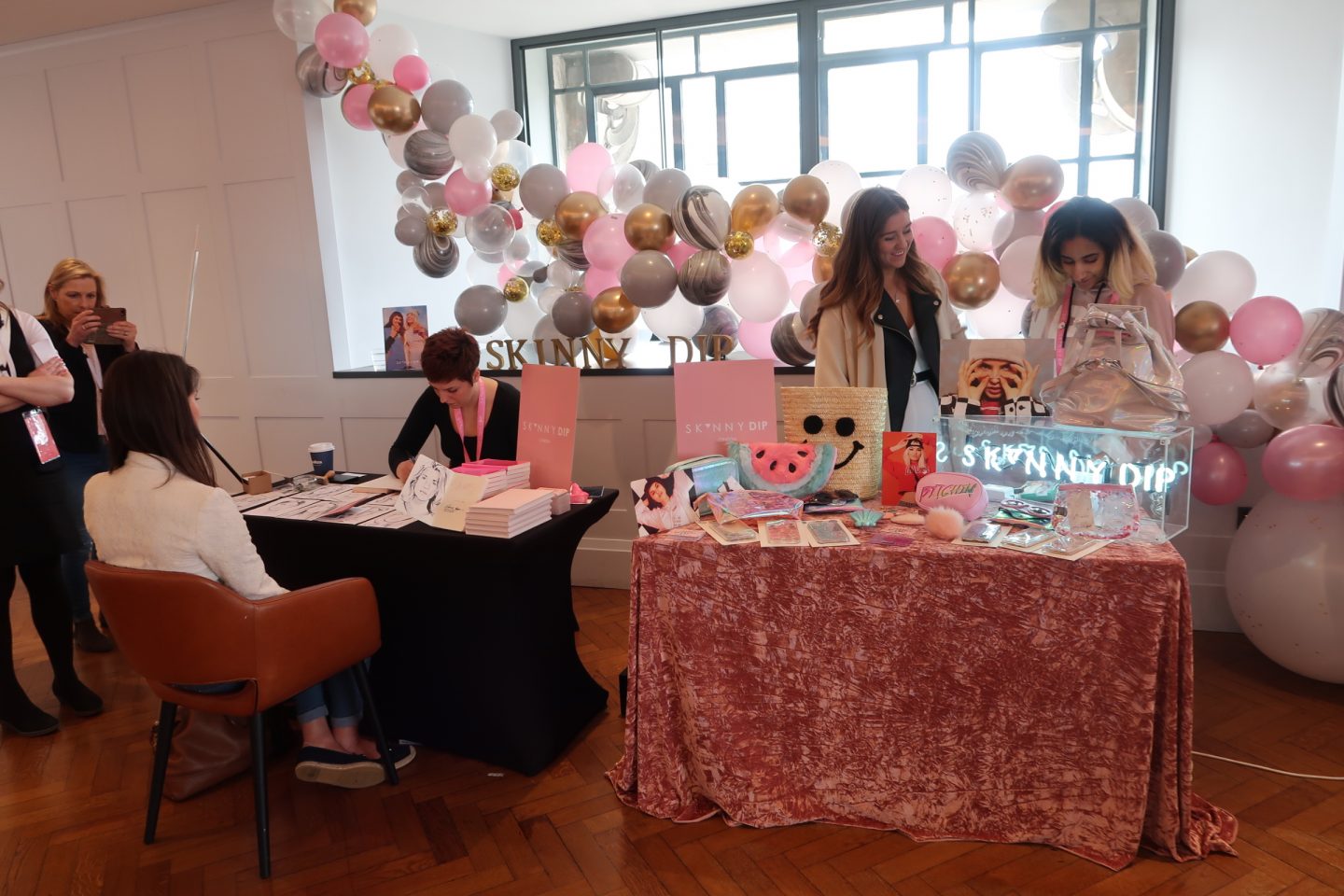 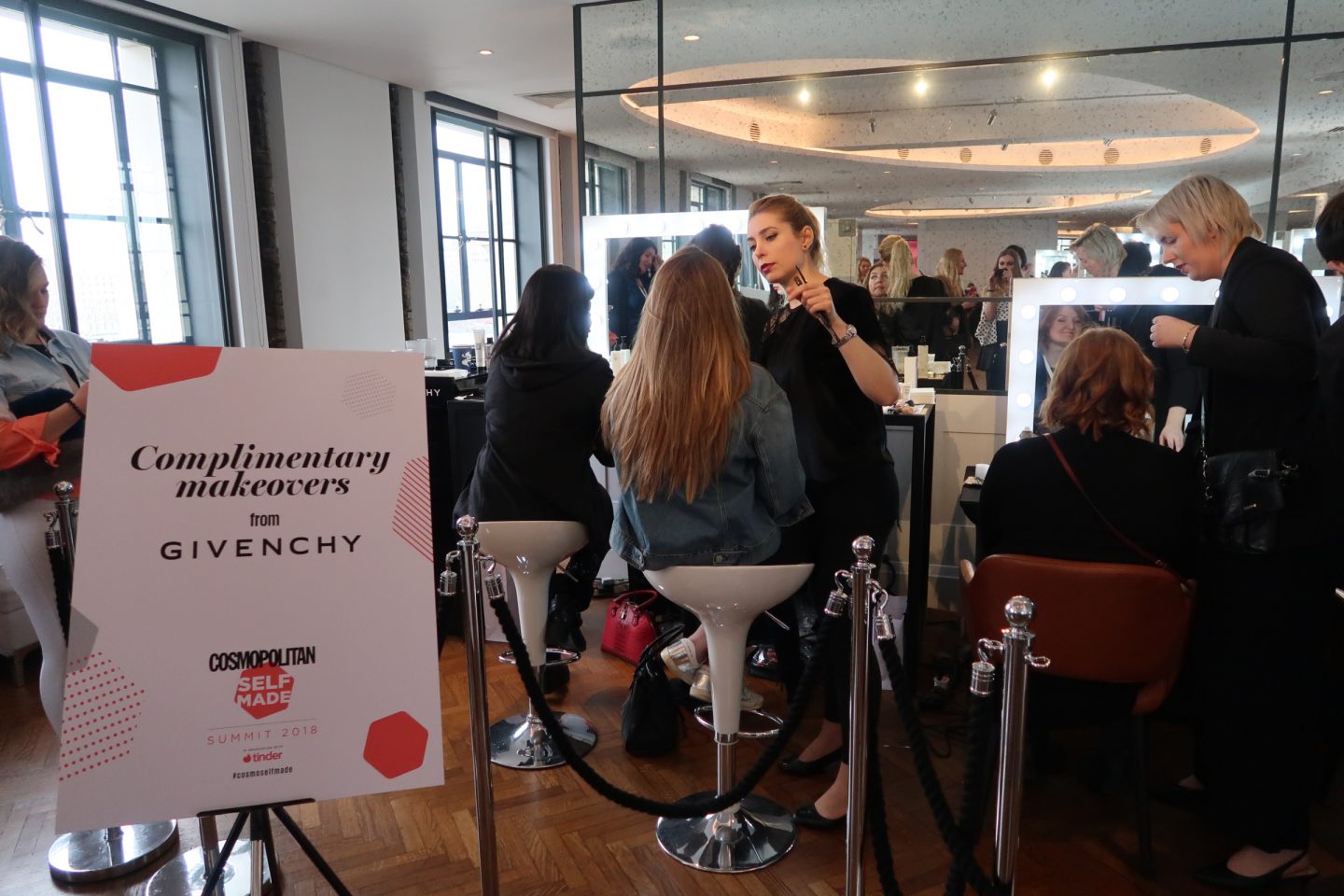 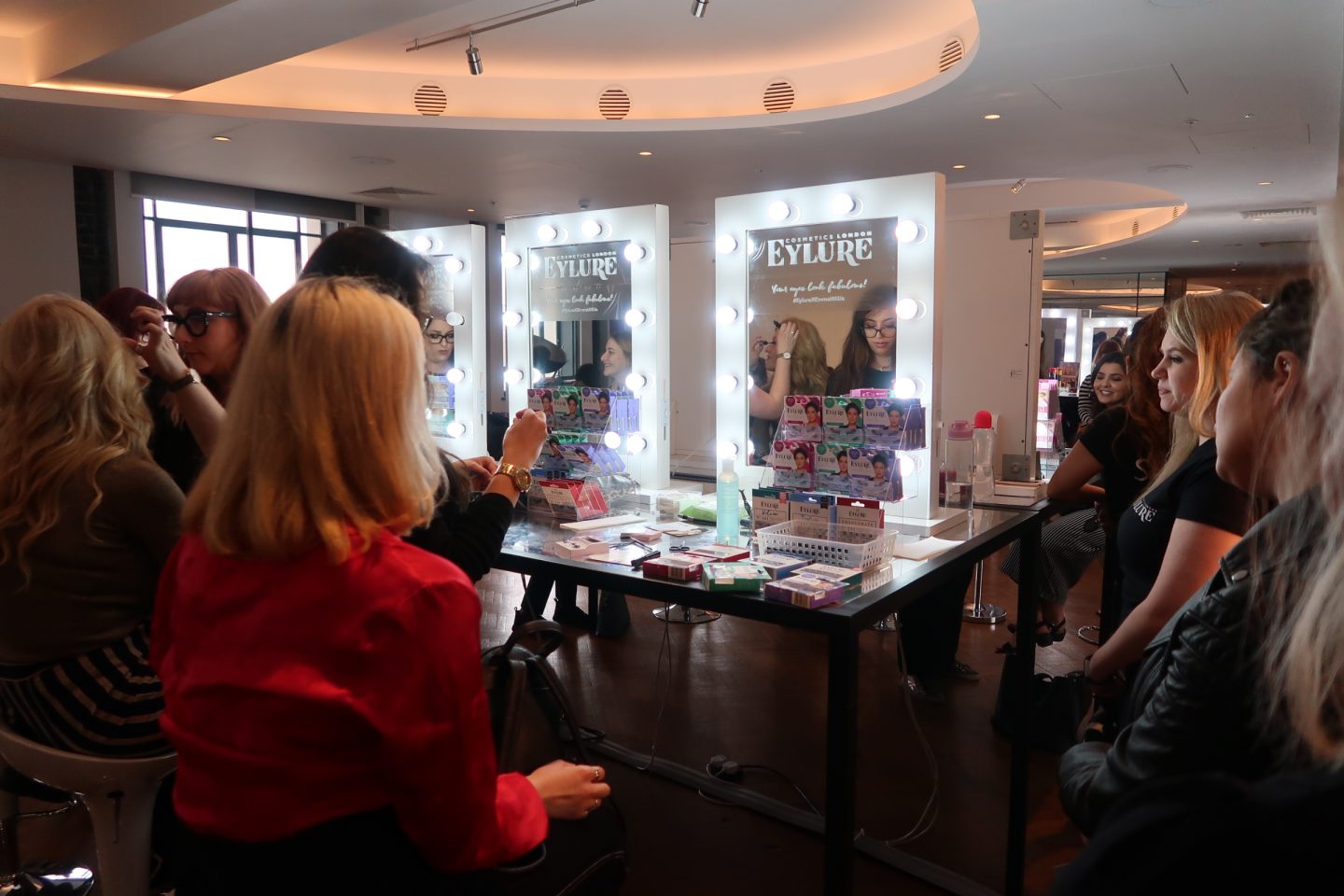 I of course got straight in line to have my nails done, which I ruined within about 12 seconds of leaving my seat. And then went to explore the photo opportunities, as like a sucker I had already done my hair, makeup and eyelashes at home. I could have got an actual pro involved. Serves me right for being extra before 8:00am.

This time the keynote talk was an ‘influencer masterclass’, with a focus around Instagram which I was a keen as mustard to hear. With the likes of Alice Liveing, Hugo Taylor, Jada Sezer and Amy Cole (the head of brand development for Instagram) there, it was not one to miss.

Amy went into more detail about the algorithm on IG, where accounts you interact with will appear first in your feed rather than chronological and so forth – none of which I was happy about, however there is talk of future changes to address the issues we all face. So keep your fingers and toes crossed.

Alice was possibly the sweetest lil thang I ever did see, she was so down to earth and humble about the opportunities she receives. She broke down how if she thinks too much about IG it becomes overwhelming and stale. And Jada and Alice both stated that they use their main feed as the more business focused side, whereas their stories is a behind the scenes of their lives and where their personalities shine through.

‘Come for the feed, stay for stories.’

After another round of questions it was time for some quick refreshments before the afternoon speeches took place.

My second session was a talk with the Cosmopolitan team. How they managed to get their jobs, the many internships they’ve had to endure, their creative idols and the types of stories and CVs that stand out from the crowd to them.

Again, they were all so down to earth, so incredibly chilled out, and they all seemed like best friends. Not to mention all v stylish. I was 100% ready and waiting to become best friends with all of them.

This was the section of the day that most had been waiting for. The opportunity to mingle with likeminded people, create contacts with the Cosmo team and the guest speakers and have a couple of cheeky glasses of pink champagne at the same time. 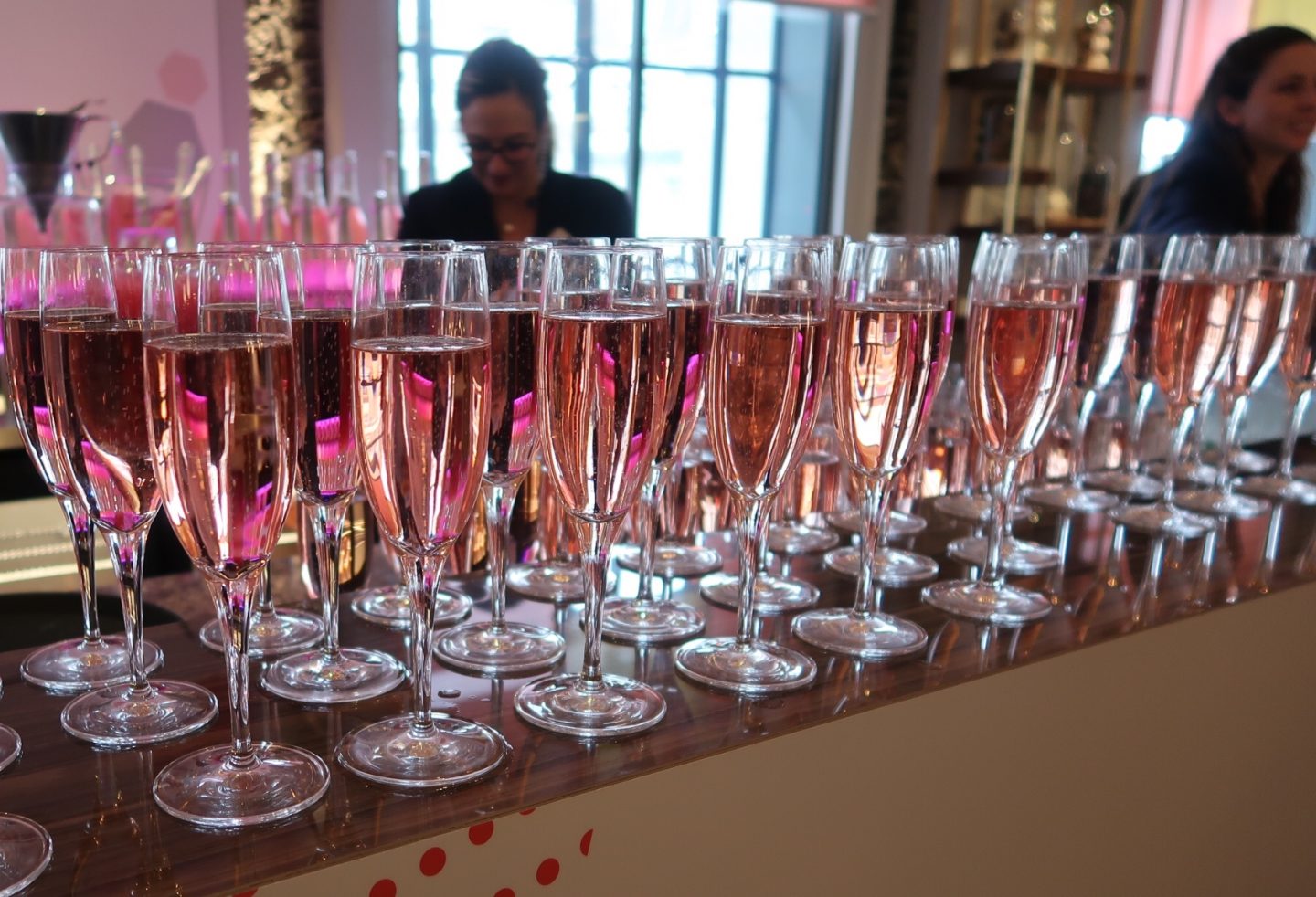 I was speaking to the beauty editor of Cosmo for a while about how she broke into the industry, if she always had an interest in beauty and what kind of writing style appeals to her the most. The answers to which are; she interned for several magazines before coming to Cosmo, she essentially fell into the beauty side of things, and the writing style she goes for is one with a natural flare and that instantly grabs your attention.

That’s potentially me out of the race then. #queenofwaffle

I met some utterly adorbs bloggers from London and up North, slightly distraught about the distance as I’m desperate for a Peggy Porschen and candid photos date hehe.

And once the networking was finished and I became increasing sad the day was over, I was presented with a goodie bag of epic proportions. Which perked me up no end. Full of goodies and treats from all the sponsored companies as well as Cosmopolitan themselves.

If you’re thinking of starting a business of any kind, whether like me you would love to become a full time blogger, or you’re setting up a travel company, setting up a fashion company, or even want to crack into the glossy world of magazines. This is the place for you.

It completely broke down the perception that only the few can ‘make it’, the opportunity is there for anyone who wants it and is willing to put in the work.

I feel v grateful to have been given the chance to attend my first ever event, and on such a grand scale. To have met some wonderful people and listened to such inspiring stories of determination and creativity.

7 Things To Remember If You’re A…

Camera vs. iPhone | Do You Really…

3 responses to “A Sunday At Cosmopolitan Self Made Summit*”